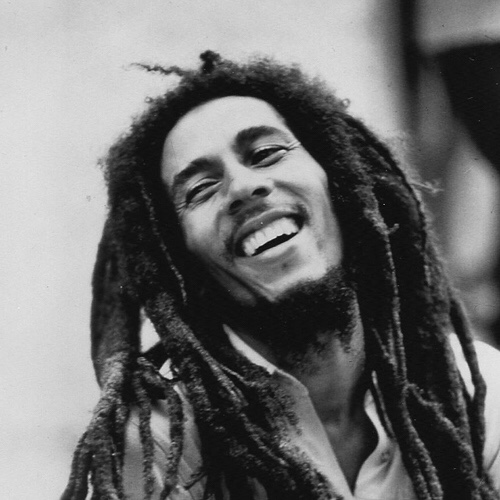 His real name was Robert Nesta Marley. He was born in Nine Mile in Jamaica the 6 February 1945and died in Miami the 11 May 1981. When he was 18 years old he created a group called the Wailers with Tosh, Braithwaite, Kelso, Wailer and Smith. Their single “Simmer down” for the Coxsone Label became the first Jamaican single in February 1964 selling at approximately 70000 copies. This first single made them famous.

Marley was a rasta who helped popularize Rastafarianism. He was a pot-smoker and a militant follower and advocate of Rastafarianism. The singer became a symbol of rasta values and beliefs.

One day Marley was a victim of an assassination attack. Some guys entered his house and shoot him and his wife. Rita was shot in the head and Marley was shot in the arm, in the chest and had 5 bullets in the left leg. Miraculously his wife did not die. 2 days later he made his concert called smile Jamaica. His presence was considered as a symbol against violence.

Marley also participated to the creation of Reggae music. Reggae appeared in the 60’s. It’s an afro-Caribbean style created in Jamaica and it’s also an evolution of rocksteady and ska. It comes from the traditional musics such as Mento and Calypso but it was also influenced by Rhythm and blues, Jazz and Soul music which made it a very blended style.

In fact, at the beginning he was a welder but he was not very gifted for that and one day he almost lost an eye. After that he decided to launch into music. Finally, he became the famous musician we all know, so fortunately he was not that good as a welder, otherwise he would never have been famous.