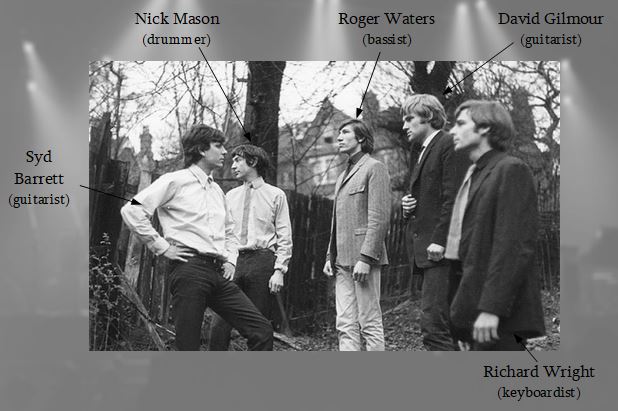 Pink Floyd is a progressive and psychedelic rock band formed back in 1965 in England, London and they are one of the biggest band of all time.

As for the genres, progressive rock, also known as prog rock, is a subgenre of rock music that developed in the United Kingdom and the United States throughout the mid to late 60s.

As for psychedelic rock, it is a genre centered around perception-altering hallucinogenic drugs, just like the Beatles, the Rolling Stones and Deep Purple.

Back to the group, Pink Floyd is, or at least was composed of 5 members : David Gilmour, Syd Barett, Nick Mason, Richard Wright and Roger Waters. There were two guitarists, a bassist, a drummer and a keyboardist.

Unfortunately, two of them passed away both because of a disease, and one of them left because he thought that there wasn’t any purpose in continuing the group anymore, and he was also afraid that whatever they’ll do in the future it will tarnish the name of the band.

They are really huge artists and are well known on a global scale as I’m pretty sure that you’ve heard of them at least once in your life and probably already encountered this image before. ( “The Dark Side of The moon” album cover )

This album of theirs is actually the third best-selling album of all time, right behind Back in Black of AC/DC and Thriller of Michael Jackson.

This album, along with three other albums : Wish You Were Here, Animals and The Wall are part of some kind off a phase from 1973 to 1979. This so-called phase is considered as the very peak of their career.

They also sold a total of about three hundred millions of albums all around the world, ranking them as the 7th best-selling artist of all time.

They were one of the most influential band of the 70s and when you get used to their style, you’re quite likely to start hearing it in other people’s songs.

Pink Floyd was essentially the first band to see widespread success using keyboard as a primary instrument. It added another layer to their music that wasn’t just drums, a guitar and a bass.

It pushed the use of keyboards in songs which eventually led to the electronic style of the next decade, inspiring many others like Airbag, Porcupine Tree and RPWL. (which are not 70s artists)

They also are one of the firsts to make heavy use of sound effects in their music because nobody really used actual sound clips in their songs like Pink Floyd and of course at the time, things like samplers and launchpads did not exist so they were the first high-profile rock band that combined sound effect with real instruments.

Furthermore, they kind off single handedly launched space rock alongside King Crimson, which is also a subgenre of rock music.

Their use of multimedia performances filled the gaps between the generations, connecting the different audiences and spreading a message of love and peace, leading to the rise of hippiedom as it was the period of the Vietnam war.

And so, not only they influenced a genre of music, one which evolved with increased audience expectations of liveliness as well as counterculture ideals of revolution, but they also had a great impact on society with for example the song “Another Brick in The Wall”, calling the society out to act and think like actual human beings instead of just being bricks completely destitute of any possible thought.

However, being artists does not mean being saints and behave like goody two shoes as they were involved several times in either drug scandals or cheating scandals.

A perfect example would be the scandal about the keyboardist Richard Wright.

According to his ex-wife, he cheated on her with one of his groupie and even impregnated her while she, on her side, was dealing with her fourth miscarriage and was utterly devastated. She also added that it wasn’t the first time he’s had an affair with a fan.

And so, even though they got into a lot of drama that are way too many and long to tell, and though things went a bit downhill between the members to the point where for some reasons, they sued each other, they didn’t go down at unknowns, they went down as one of the most legendary band of all time.

A/N: One of our indwelling human flaws

Is our impending tendency

To a nebulous future

That we rarely grasp,

In pursuit of which we